The world’s worst nuclear accident happened on 26 April 1986 at the Chernobyl nuclear power station in Ukraine. Highly radioactive uranium and graphite were expelled into the atmosphere. The Russian government permitted a censorship over the media, stopping the flow of information to the rest of the world. They increased the acceptable levels of radioactivity that people could be exposed to, for economic reasons, reducing the number of people needing to be evacuated. 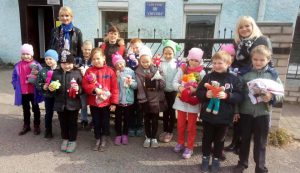 Of the country’s prime farmland, 25% has become nuclear wasteland. As a result, over 800,000 children in Belarus and 380,000 Ukrainian children are at risk of contracting cancer or leukaemia. Belarus has become a zone of international ecological disaster, as its people were exposed to radioactivity 90 times greater than that from the Hiroshima atomic bomb.

Chernobyl’s Angels of Hope, Biggar are a charity that provide a month of love and care each year to children affected by the Chernobyl Nuclear Disaster. Affected children aged around 8 years old from Belarus come over to Biggar, South Lanarkshire, Scotland to live in a loving home for a month, breathing clean air, eating fresh wholesome food, and sharing family life.. The children travel with 2 interpreters who remain in Scotland with the children for the duration of their stay.

All donations are very much appreciated, thank you!

Chernobyl’s Angels of Hope is a charity registered with the Office of the Scottish Charity Regulator (OSCR).